There is no universally accepted definition of art.

Recently I threw together a birthday surprise photo shoot for my good friend, Eric Curtis, a brilliant photographer and all around good guy. I gathered what close friends of his I could for this image which was inspired by master of darkness Joel-Peter Witkin. After taking Eric to see the opening reception of the Witkin brothers show, Twin Visions, at Jack Rutberg Fine Arts in Los Angeles, I had spawned the idea.  Eric loves JPW and they both hail from New Mexico. Blam! son, it must be done, and so the concept of “Circus Freaks” came about.

Dead bodies are a bit hard to find and dragging them about in public could get a law abiding citizen like myself in trouble, with that said, we had to make do with costumes on hand.  I used my Canon 60D/24-105 L-series lens and had our friend Zach borrow Eric’s own lighting equipment to use for the shoot without his knowledge of what they were really being used for.  The funny thing is Eric actually came to my loft and saw his own equipment in my living room.  He inquired how I had obtained them and with my skills in Jedi mind tricks, I was able to convince him that I had Zach drop the strobes off after he used them so I can “try them out”.  In return, Eric asked if I needed any help. Hah! I can be a manipulative genius for good when the time calls.  Best to have me on your side.

In the end I think it came out super well with the help of everyone on board.  Never under estimate great people, a beautiful day, booze, the old LA Zoo, and Photoshop. The collaboration was a success in so many ways. It was presented to Eric on May 10th with gushing acceptance and love.  Mission accomplished.  Looking forward to more devious photo shoots in the near future. Thank you, Vanessa, Madeline, Reshma, Charles, James, Scott, Leah, Rosco, Hannah, Zach and Laura! Sometimes you never know what an item may or may not do. About ten years ago I purchased this Koons paddle ball game edition created by Duetsche Guggenheim in 2000. This was not the signed limited edition of 100 unfortunately, it was the unsigned edition of 900. I purchased it for $150 US dollars. I totally packed it away, never displayed it and forgot about it until today when I pulled it out of the trunk of my car. Yes, I’m the guy who stores art in his trunk, actually it’s a great place, no direct sunlight and minimal dust. Anyways, to my surprise, it is now worth two to three grand and on some auction sites up to six. I still personally wouldn’t pay more than $200, but that’s just me. There are plenty of materialistic suckers in the world who have lots of money to toss around. The value of copies are a very interesting thing in the art world. I’m going to keep quietly collecting and hoarding art, just not in the trunk of my car. EPIC!!!!!  David Altmejd, is on his way to being the greatest artist of our time in my opinion.  He just gets more mad every time I see his work, and every time I see his work I am left breathless.  Inspiring to the core, his imagination takes me to places I’ve never been.  I first saw his work at the Whitney Biennial in NYC a number of years ago and have been following him ever since. He just makes me want to push myself.  Just see his work for yourself.  You won’t be sorry I introduced you to this amazingly talented Canadian.  Good god. 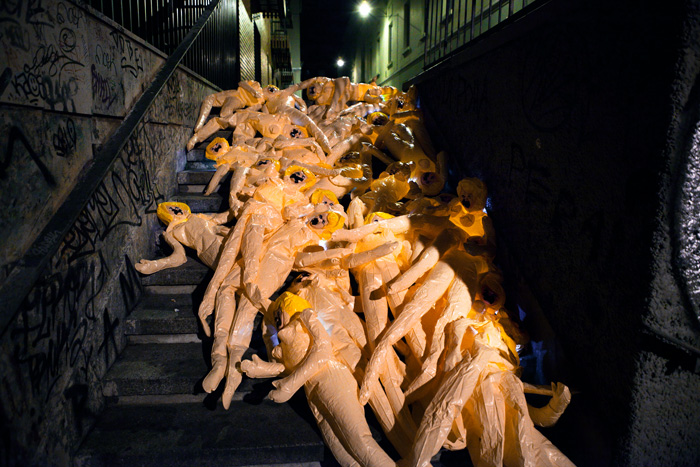 Always making a statement.  I have been following Spain’s Luz Interuptus for a few years now.  This groups light installations come from all different innovative media’s and I love how renegade they are, art in it’s purist form of expression.  Here with “Rights to Trample On”  they definitely take a political stance for women.

In Spain it seems that the social rights acquired during many years of democracy are in danger of extinction. These rights are considered to be basic by the citizens of evolved societies which we desire to be like, are now being diminished and if we are not careful, will eventually disappear through maneuvers of distraction, which do not deceive almost anyone, who does not want to be fooled.

Not happy with taking away the rights of workers, of the citizens, with reducing education and health care to a minimum and taxes at historical highs, now they are trying to make decisions on the fundamental rights of women, reducing the possibilities de abortion to virtually non-existent.

Uh, YES PLEASE! This looks incredibly cool and I can’t wait to try it. They seem to be Kick Starting it, but it is available to purchase. Their original goal was to make 30k English $, but have been supported by almost a quarter million. Impressive!